Last May I was visiting family in New York when I got a call from the amazing and irreplaceable Natalia Reagan. She asked me if I was interested in being on “StarTalk All Stars” (a podcast that is part of Neil deGrasse Tyson’s network of science outreach). My first reaction was panic! It sounded very scary as I hate my voice and get very nervous at the thought of having to seem like I know what I’m talking about.

But, I also feel that anthropologists need to spend as much time as we can on outreach and public engagement. The narratives that we produce on who we were are, inevitably and inexorably, linked to narrative of who we currently are. This research can have profound, and sometimes evil and insidious, implications. Beside, Natalia is one of my favorite people in the world and has done more for anthropology than almost anyone I know.

You can listen to it here:. I haven’t had the courage to listen but a few colleagues and students have said I come off ok :)

But here is the why I am writing this post. A few weeks after it was first released I received an email from Chris Yarsawich, a teacher at Holy Innocents Episcopal School. He had heard the podcast and wanted to know if I was interested in spending time down there as a Global Scholar in Residence. I’d have the chance to talk with students from pre-K to seniors in high school about what it means to be human. And even talk about my first love in anthropology, Neandertals

We ended up setting up what I think was a pretty great experience. I spent the first day with the littles at the primary school. I told them a bit about what I do and how archaeologists excavate site. We then went to the sandbox and I dug up a T/Rex skull (before you email me in anger, yes yes yes, anthros don’t dig up dinos. We told them that. But I also feel that this was a lesson more in the idea of what other jobs are out there. The look on their faces when they saw the skull was priceless…) 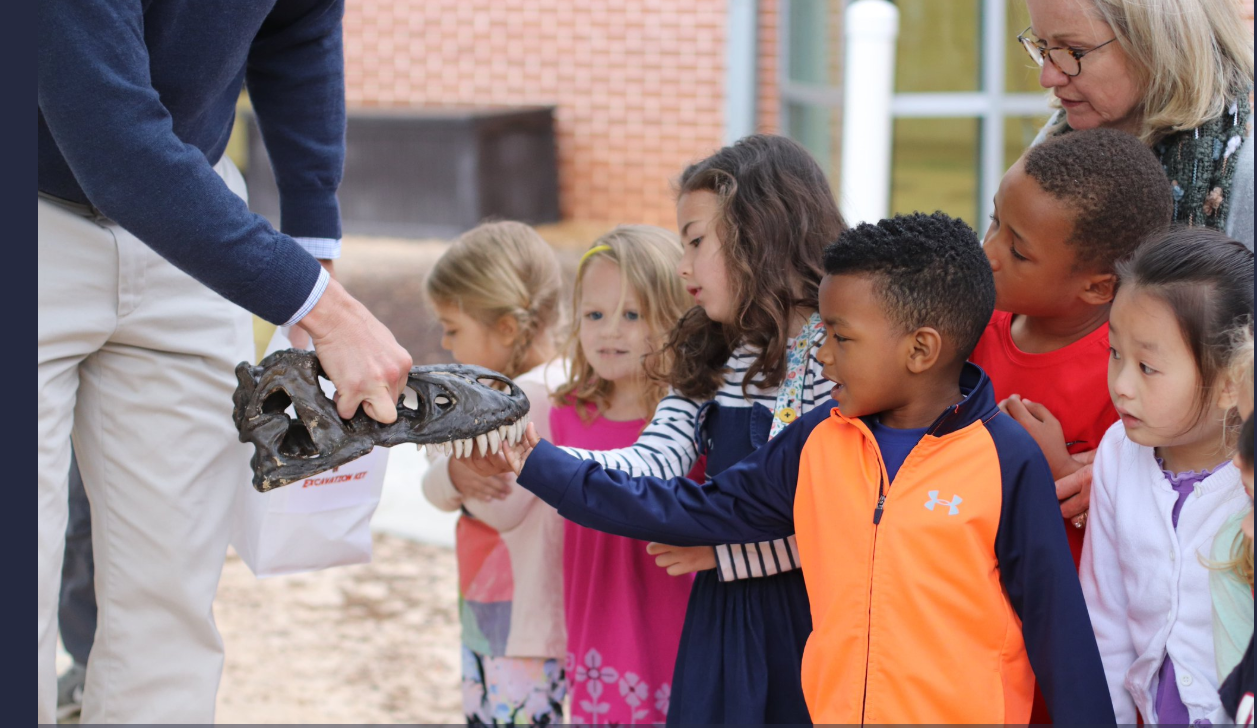 (The head of the school told me he saw kids playing with the little magnifying glasses we gave them. 2 days later in the cafeteria 30 of the kids saw me, yelled “Dr. Marc!” and came running up to give hugs, high fives, and told me what they found in the sandbox the next day.)

I also worked with middle school students, teaching them about human evolution and bones. Along with Elizabeth Scholz we setup stations to talk about how we can glean info from bones. I sat in on a few classes and hosted 3 lunch and learns about eugenics, racism, and colonialism. We also set up a talk in the chapel, where the pastor and I spoke on how theology and anthropology can be mutual allies.

The last day we set up an archaeological dig for the 5th grade. The art class from the Upper School made copies of Egyptian artifacts found at the Carlos Musuem and then the teachers buried them in the flower beds (picture). Students got to dig them up and put them together. it was amazing watching them dig and think about what these ‘artifacts’ were. While they were old enough to realize that it wasn’t real, they were still into the whole process and enjoyed getting messy. It had been awhile since I excavated and I had forgotten how fun it can be (Calvin notwithstanding ). 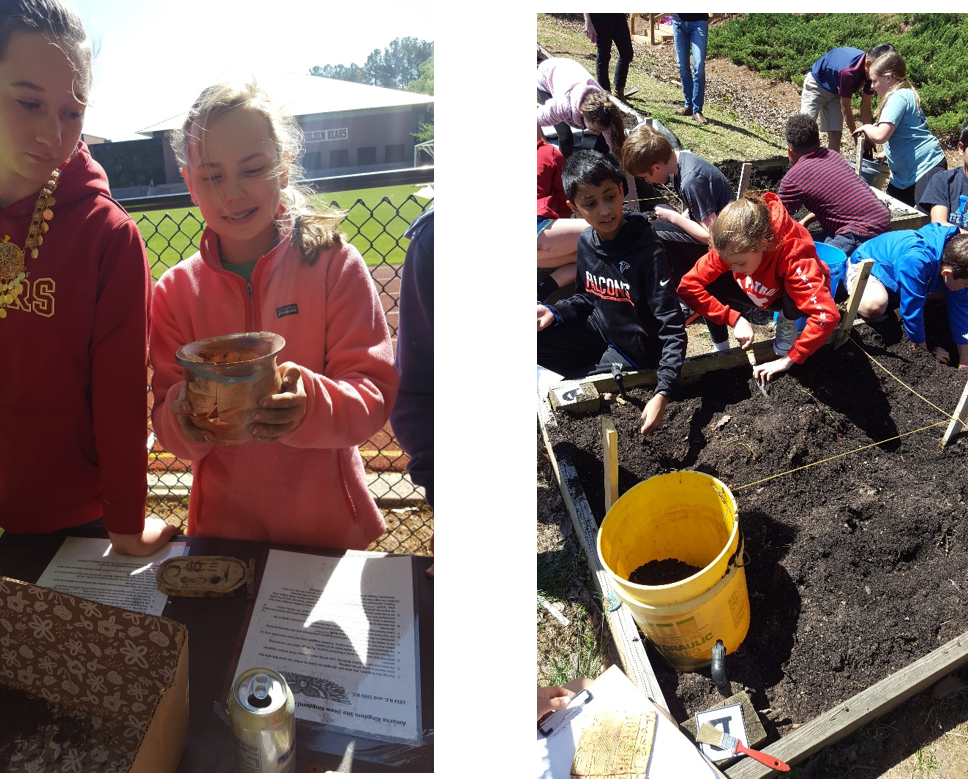 Another highlight was a museum panel discussion with Cannupa Hanska Luger, a Native American artist from Standing Rock and Dr. Rebecca Stone, professor of Art History of Emory University and faculty curator of Art of the Americas at the Carlos Museum. We talked about who owns the bones and remnants of the past, and who gets to tell their story. It was really fun to sit on this panel and I learned a lot.

It is always fun to talk to people outside the academy and it is easy to forget that what we do is inherently interesting & fun. That being said, some of my colleagues think that projects like these are a waste of time. Yes, it won’t get me a tenure-track job or a new publication (though Chris and I are going to present on this project at a teaching conference next year). I never would have had this chance had I not gone on StarTalk and taken advantage of the wonderful opportunity Natalia offered. And I’ve already spoken to colleagues about future projects related to education at the high school level.

If we are to stay relevant we need to leave the Ivory Tower. I had no idea that anthropology was a job till I got to college. I knew that museums existed, and that people studied the past, but I didn’t know some people were lucky enough to get paid to do it. Doing outreach is not just a privilege, but a necessity. Conversations about the causes and consequences of human variation are going to happen no matter what, and unless anthropologists actively take part in these discussions we won’t have a seat at the table.

If we want to make an impact we need to get out of the library sometimes!